Located on the Des Plaines riverfront on Joliet Street, Harrah’s Joliet is a modern Art-Deco-style resort with a 204-room hotel, 40 000 square feet of gaming space, 31 table games, over 1 000 slot machines, a poker room, a gift shop, and four restaurants.

The History of Harrah’s Joliet

Because Harrah’s Joliet opened in 1993, when land-based casinos were still illegal in Illinois, the venue was originally based on the Northern Star, a 210-foot yacht that cruised the Des Plaines River every two hours. The Northern Star featured 40 table games and 500 slot machines. In 1994, Harrah’s Joliet expanded onto a second vessel, the Southern Star, which, with its paddleboat look, was much better suited to the role aesthetically.

In 1999, the 11-floor Harrah’s Joliet Hotel was added on the banks of the Des Plaines River. 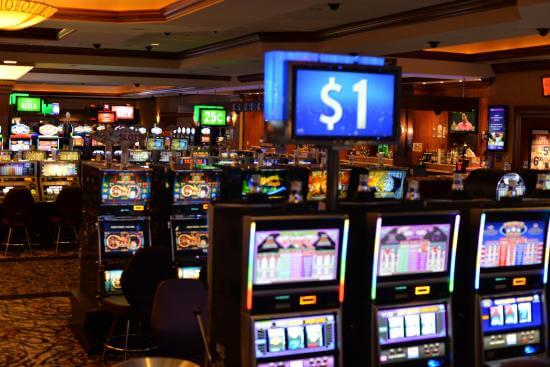 Harrah’s Joliet took its present form in 2001, when Illinois law was altered to allow riverboat casinos to remain docked. In response to this change the Northern Star and the Southern Star were replaced with two joined barges.

Staying Over at Harrah’s Joliet

There are four options to choose from when booking one of the 204 luxury rooms at the Harrah’s Joliet Hotel: Luxury King, Premium King, Luxury Double Queen, and Premium Double Queen.

Guests may opt for either one king-sized bed or two queen sets and highlights include pay-per-view movies, private voice mail, fully stocked bar fridges, hair dryers, and more. Premium rooms are located on a separate secured floor of the Harrah’s Joliet hotel. Room rates at Harrah’s Joliet range from US$ 71 to US$ 105.

Games to Play at Harrah’s Joliet

There are 1 138 slot machines, including over 200 video poker games, on the casino floor at Harrah’s Joliet. Popular slot machine titles include Reels of Wheels, Ripley’s Believe it or Not, Moby Dick, and The Walking Dead, whilst video poker players can choose from Double Bonus, Deuces Wild, and other variation found at CAD casino.

Other table games on offer at Harrah’s Joliet include blackjack, craps, roulette, mini-baccarat, and more.

Places to Eat at Harrah’s Joliet

There are several different restaurants at Harrah’s Joliet, which cover buffet, casual and upscale dining.

Flavours buffet, for example, offers a wide array of dishes from all over the world, including deep-dish pizza, stir fry, barbeque, and more, with the selection becoming even greater and more interesting on theme nights. The buffet also features 40 feet of desserts, including a wheel of cupcakes.

Aces Diner, meanwhile, serves up casual all-American fare like burgers, hot dogs, Italian beef sandwiches, and more. Harrah’s Joliet also has its own Starbucks, where guests can enjoy a range of coffee-based beverages as well as light meals like pastries and sandwiches.

For a more formal setting and a fine-dining experience, Harrah’s Joliet guests can visit The Reserve, which serves pasta, rib-eye, tiramisu, fruit crepes, and other similar dishes.

Things to Do at Harrah’s Joliet

For night-time entertainment, Harrah’s Joliet guests can visit Sheer cocktail bar or travel into the city and attend a show at the Rialto Square Theatre.

Harrah’s Joliet also has its own gift shop, where guests can purchase Chicagoland souvenirs, apparel, and other items.